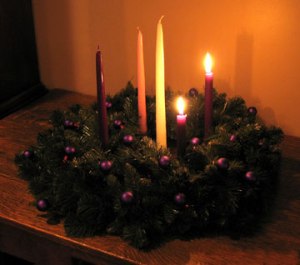 Language and English skills are funny, especially homonyms.  When you hear the word peace – without any context clues – you could picture all sorts of things.

Piecework, as in quilting

A piece of pie (yum)

Or how about pièce de résistance?  Ok, so maybe French isn’t on EVERYONE’s mind!

And then there’s Peace during the holiday season, which brings the thoughts of peace on earth, good will to men.

The days drawing close to Christmas in America don’t often reflect peace or quiet.  But, when we lived in Germany, towns stopped, shut down, and became totally motionless – even quicker than usual if there was snow coming down.  Our last Christmas in Germany was exactly like that – but rarely does that occur here.  Even if there’s a huge snowfall, eventually there will be the noise of a snowplow.

But this particular Christmas of 2001, found us experiencing a full-blown blizzard in the late afternoon on the 23rd of December.  We had spent the afternoon out with friends and as we traveled home, the snow blew and drifted across the B-19 highway.  It was a slow, creeping drive home, but thankfully we made a safe arrival.

Anybody could clearly see it was snowing hard and piling up, but it made no difference to the Germans because they were officially on holiday and wouldn’t be plowing anything.  Their Christmas celebrations would begin the next day on the 24th – steeped in Catholic, Protestant, and local traditions alike.

So, the snow fell silently.  The cars that sat parked on the street, began disappearing in the fast-falling flakes.  It was like a blanket of soft peace was being layered over every home.  Occasionally you could hear the muffled sound of a sidewalk being cleared by a lone shovel…

If you stepped outside, homes with lit windows glowed warm and inviting.  Families were together and everyone was where they needed to be.  It was time for everyone to enjoy their privacy and no one left home that night.

When I reflect back to that December evening, I feel a stirring and a longing in my soul to keep that image of peace and stillness in my thoughts each day.  It truly is a peace which transcends all understanding… Phillipians 4:17a.

Hopefully, as I grow in my walk with God, I will allow that peace to reside fully in me each day.  Like the warm, quiet, peaceful blanket of a Christmas snow.

Posted by theunfinishedchild on December 11, 2012 in Christmas, Life, in general